These women remain my heros and mentors. Maria Montessori was, of course, the founder of the ingenious Montessori Method. I helped start a Montessori school in Norwalk, Connecticut, and both my children attended into the elementary level. Montessori was the first woman doctor in Italy; she also promoted the idea that children belonged to the earth, not just one country.

Anais Nin, diarist and novelist, inspired me as a writer and independent woman who also maintained intimate heart connections with other people. Her diary with its focus on feelings and art was a revelation. I had the pleasure and honor of coordinating a small weekend event with her, as well as publishing her earliest collection of stories.

Frances Steloff, who lived to be 100, was the founder of the Gotham Book Mart in New York City. Leaving home in the eighth grade, she bought her own shop eventually and lived above it for decades. It was the home of many literary soirees, including regular meetings of the James Joyce Society and Krishnamurti tape discussions. She had a strong spiritual bent and a knack for placing just the book a person needed into their hands. She had a long white braid. Her desks were a jumble of papers, on which her beloved Putsi dozed.

Order from www.amazon.com,www.barnesandnoble.com,www.powells.com, or your favorite independent bookstore. Or, see books & tapes section.

Your Soul at a Crossroads, with Steps You Can Take Not to Lose It
National Audubon Society Almanac of the Environment/ The Ecology of Everyday Life
A compendium of articles, quotes, puzzles that show how our daily activities affect ecosystems. Published by Grosset/Putnam.
Tryin' To Get to You, The Story of Elvis Presley
That's me at age 15 - to Elvis' right
Frolic's Dance
The story of a snowshoe hare surviving in its community in Glacier Bay, Alaska. A Smithsonian Heritage Book. 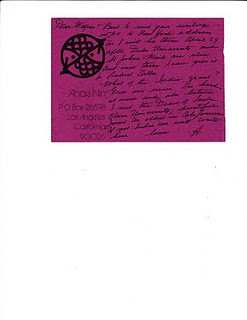